Scientology Youth For Human Rights Award Winner Nation of Islam Brother Rizza Islam is interviewed in the video: "Why Join The Nation Of Islam Documentary Series One | Part Eleven."

The video provides confirmation for something I believe Jeffrey Augustine has noted. That Rizza Islam joined the NOI only five years ago, in March 2015. Rizza was born on March 17th, 1990, so he was around 25-years-old when he joined, which strikes me as rather late in his life given his supposed devotion to Farrakhan and the NOI.

"The takeover is inevitable."

Please go to the link to watch the video 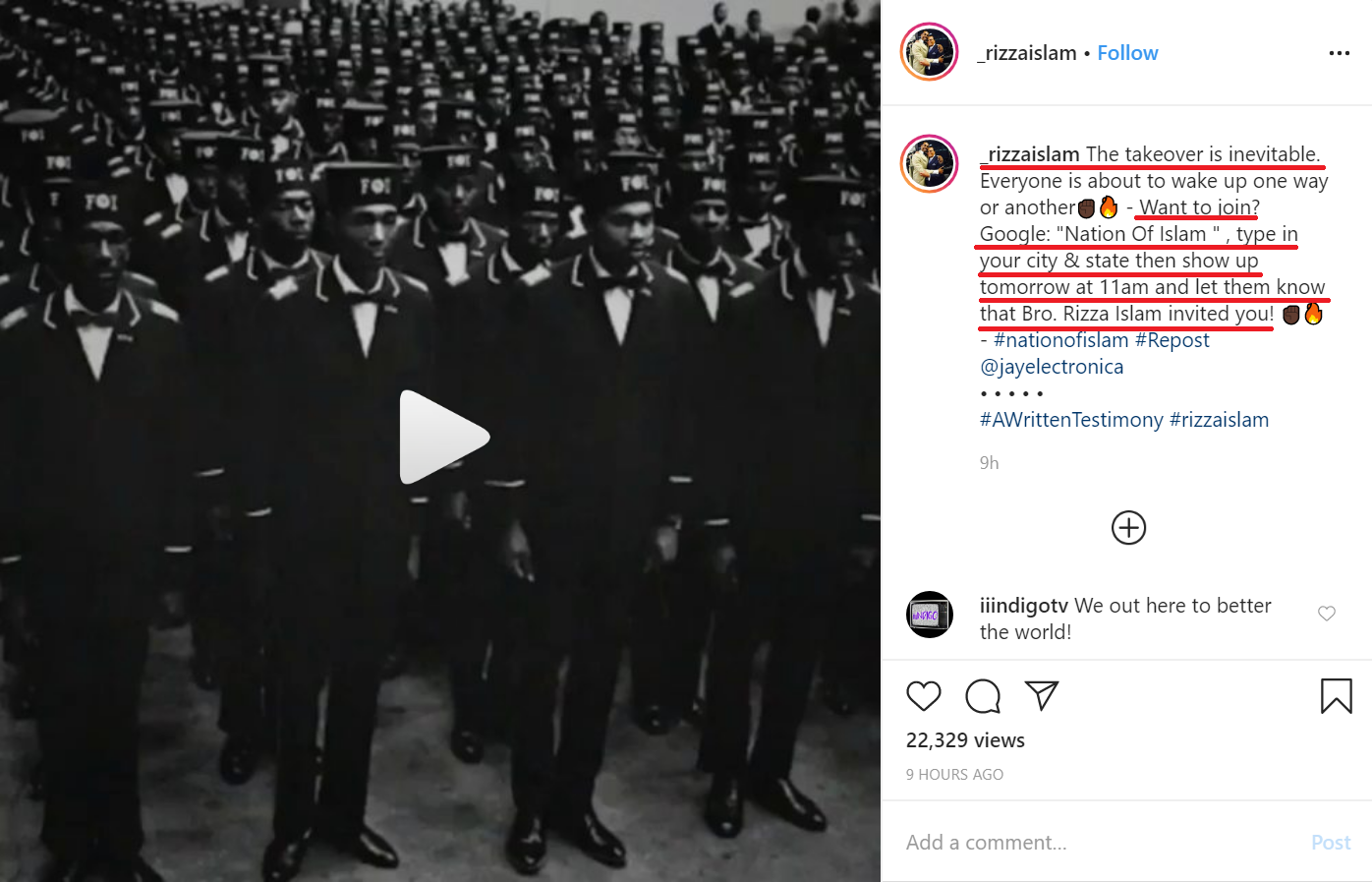 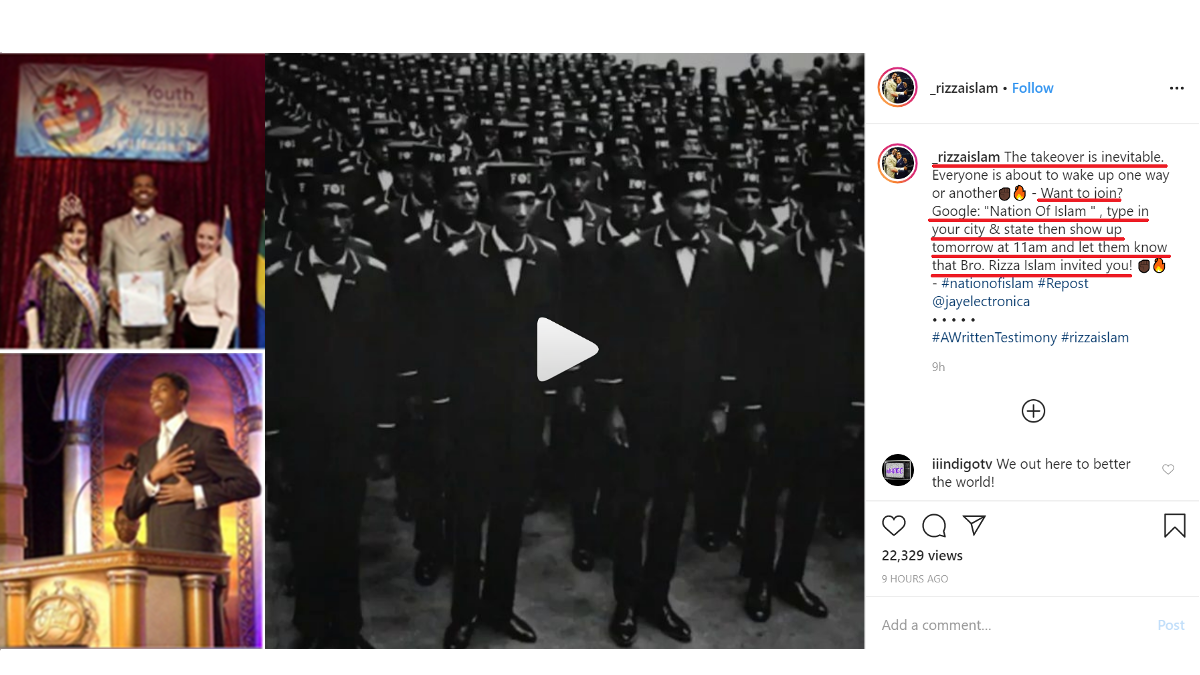 - "USING VACCINATIONS FOR YEARS is the epitome of stupidity, IRRESPONSIBILITY";

- "YOU WILL BE TEST SUBJECTS";

- "depopulation is the agenda." 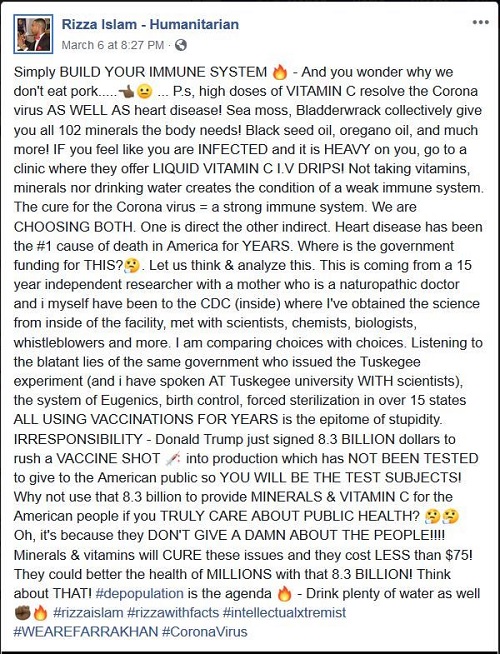 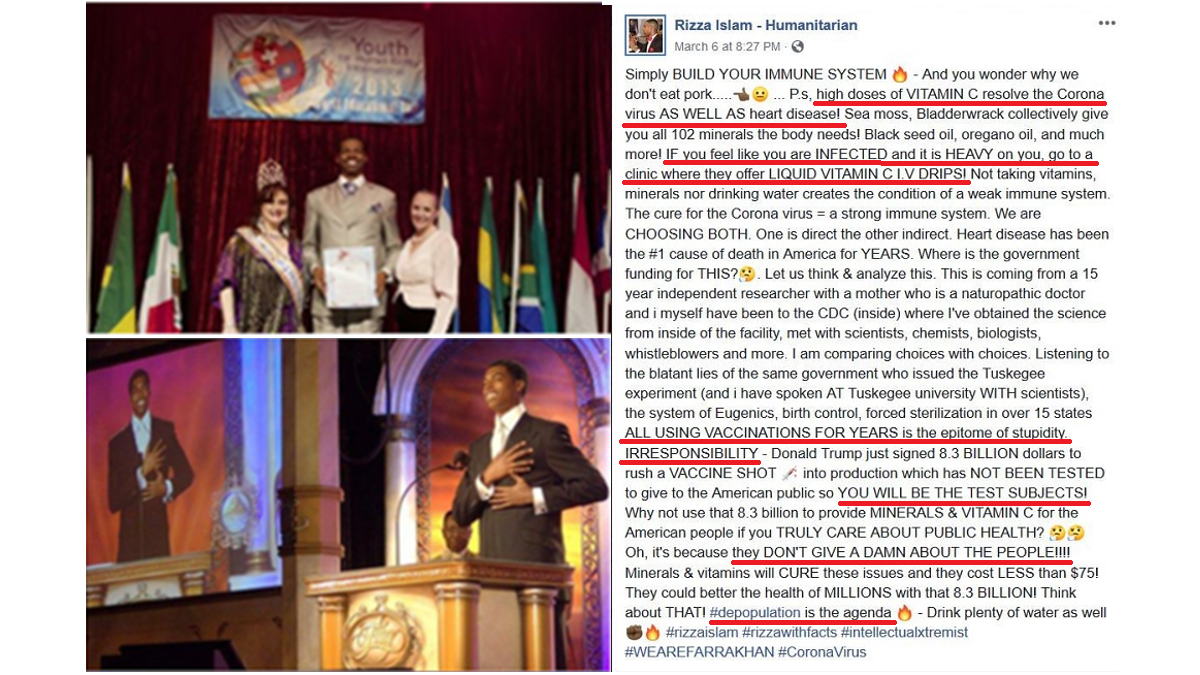 Followed the light out of the tunnel

Does he really believe what he spews? Does he eat the diet that he espouses? But he goes WAYYYY over the top, no pork??? No bacon??? No pulled pork bbq? What is the world coming to!!

VIDEO: Rizza Islam On His Solution On Covid-19

In response to the coronavirus pandemic, Rizza Islam says:

Earlier today, I posted about Rizza Islam's Instagram post on the caoronavirus, FEMA camps, 5G radiation towers and National Guard tanks. That may have been the last straw.

ETA: Page appears to be back. Click link below to check.

Scientology Youth For Human Rights Award Winner Nation of Islam Brother Rizza Islam says it is BOTH Caronavirus and 5G.

Staff member
I guess it never dawns on the Riz that Allah, is the ultimate cause of all this. He must be down with it otherwise why would He let it happen?
"I just may be the lunatic you're looking for."

That was my first thought too.

However, there is another explanation which makes quite a bit of sense.

Rather than Rizza being censured, suspended and/or banned from Instagram--I perhaps he has just been removed by the NOI so that there is adequate time for him to prepare for his coronation as their new miraculous messianic messenger. Everyone will soon be required to start addressing him as:


THE HONORABLE RIZZA ISLAM
Peace Be Upon Him​
It takes months to go back through all of his books, photos, videos, posts and sacred scriptural revelations online. All of the lies and entheta must be cleansed, such as the racist slur that he was previously arrested, put in handcuffs and taken to jail as part of a criminal fraud conspiracy.

High ranking NOI holy men are right now having to comb thru archives and set the record straight---that Rizza was working for high ranking Department of Defense leaders as part of an "Intelligence Gathering Operation" where people were ripping off the insurance companies for many millions of dollars. Obviously, part of the sting was that they needed to catch the white devils accepting money, so naturally Rizza and his mother had to "act like they were taking millions too". Rizza's mother also was undercover. The entire criminal conspiracy indictment against them is all part of the ruse to lure in bad people.

In any case BY POSTING REALLY INSANE CONSPIRATORIAL PARANOIA ABOUT HOW "THEY" ARE PLANNING TO MURDER BILLIONS"---well, that completed all of his requirements to replace The Honorable But Insane Conspiratorial Paranoid, Louis Farrakhan.

How interesting that the leader of Scientology, says nothing about the insane members of the NOI who he keeps giving FREEDOM MEDALS to. If you have any questions about it, don't ask me---just write to Mr. Miscavige directly but kindly address him in a reverent way that reverends deserve:


THE CODE OF HONORABLE DAVID MISCAVIGE
Peace Be Upon Him


wait, is it too late to change that postulate?

Peace PCs Be Upon Him
(for refunds)

please sir may i have another?

. ​
Last edited: Monday at 5:19 PM
"Scientology literally saved my life! Without Ron's books I would have frozen to death!" - Don Hubbard (see avatar) is Ron Hubbard's estranged & evil twin brother. As Founder of the Church of Hoaxology and bestselling author of "HOBONETICS", Don is the first human being to achieve the state of OH (Operating Hobo).
You must log in or register to reply here.
Share:
Facebook Twitter Reddit Pinterest Tumblr WhatsApp Email Link
Top