EXCERPT from blog:
I am not sure who sent this to me, but it is an interesting collection of quotes from the leader of the Nation of Islam:

EXCERPT from blog:
I am not sure who sent this to me, but it is an interesting collection of quotes from the leader of the Nation of Islam:
Click to expand...

This is beyond strange bedfellows, this is really sick.

Birds of a feather doesn't do justice to this Scientology and NOI bedfellowship. Mudpuddleship.

That article by Mike Rinder and the sampling of sociopathic hate speech should be circulated to as many people as possible! 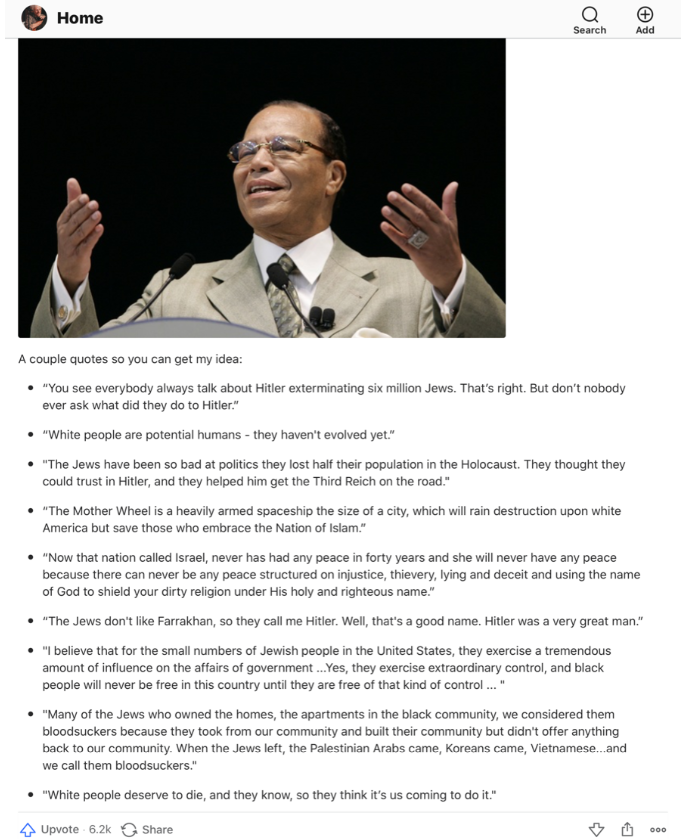 This literally begs for a campaign where some notable politicians or celebrities:


PUBLICLY DEMAND TO KNOW IF DAVID MISCAVIGE & THE CHURCH OF SCIENTOLOGY
UNCONDITIONALLY DISAVOW AND CONDEMN THE NOI'S RACISM AND HATE SPEECH.
​
If there is not unbearable public pressure, humiliation and scorn being heaped upon Miscavige and the COS (Crimewave of Scientology) they will say and do absolutely nothing about the Nazi-like hate and "Big LIes" being promoted by the NOI (and thereby, being endorsed, empowered and promoted by Scientology).

If there is no reasonable way to bring direct pressure on Scientology's misanthropic misfit Messiah Miscavige, then an even better pathway would be to slam TOM CRUISE and all of his agents, lawyers, producers, directors and the studios that finance and/or distribute his entertainment products.

If orchestrated correctly, both Cruise and virtually EVERY SINGLE ONE OF THOSE ENTERTAINMENT FACILITATORS would be forced to issue a public apology and disavowal.

I haven't given any thought yet to who/what would be the origination point of such a public outrage & outcry. Perhaps, Mike Rinder and Leah Remini are the obvious and brilliant choice, if they would consider a 1-2 HOUR SPECIAL, dedicated to just this hate speech. In fact the normally liberal "Southern Poverty Law Center" has identified and labeled the NOI & Farrakhan as a hate group. ( LINK HERE WITH TO SPLC's WEBITE THAT CONTAINS YET MORE HATE QUOTES )

Traditionally, nothing can penetrate Scientology's pathological denial and lying, when confronted with its own crimes. A brilliant exception was Mike/Leah's show "THE AFTERMATH". I suggest that even more powerful is if "THE AFTERMATH" can leverage its considerable success/support to an even deeper-penetrating bunker buster where Miscavige is hiding. Public shaming is the only thing that Scientology truly fears---because not only does it dry up their marks' donations, it transcends the bulletproof religious protections that Scientology exploits.

Cruise the messianic moviestar has been the cult's greatest shield against the public one and for all resoundingly rejecting & ridiculing it out of existence. Their greatest strength is simultaneously and paradoxically their greatest weakness.

What needs to happen is to see Tom Cruise and John Travolta's and Kirstie Allie's name and reputation held up to the harshest light possible. So that the mere mention of their name becomes synonymous with "hate speech" and endorsing a "hate group", the NOI and it's fanatical leader.

Why Scientologists have not called out their own "church" could soon become a very nasty question that gets asked in all public venues. Then let's see Cruise jump on couches when he takes the mike at on a talk show and begins to launch into "high-toned "hyperbole about hiss latest action movie.

TALK SHOW HOST
Wait, Tom. Stop! We are all excited to hear about your
latest action movie. But talk about action, what action
have you taken to disavow and condemn the hate speech
of your church's members from the Nation Of Islam?

CRUISE
Ummmm..wutttt?
Never mind that, this e-meter's
tone arm goes up to 11!

.
.​
Last edited: Mar 23, 2020
"Scientology literally saved my life! Without Ron's books I would have frozen to death!" - Don Hubbard (see avatar) is Ron Hubbard's estranged & evil twin brother. As Founder of the Church of Hoaxology and bestselling author of "HOBONETICS", Don is the first human being to achieve the state of OH (Operating Hobo).
O