What exactly is a cult - a 4 factor model analysis

I see this pop up during C.Shelton's and other such podcasts: people ask "Is X a cult"? Are catholic nuns a cult? Are the US Marines a cult?

This has been bumping around my head for the last year or so. We all use terms like "cults", "high control groups", "high demand groups", "destructive cults"... these are all rather nuanced categories. So I've attempted a very non-Hubbardian (IE: non-dictionary centric) attempt at categorization.

Here is the Karakorum 4 factor model (K4FM), with 15 possible sub-types: 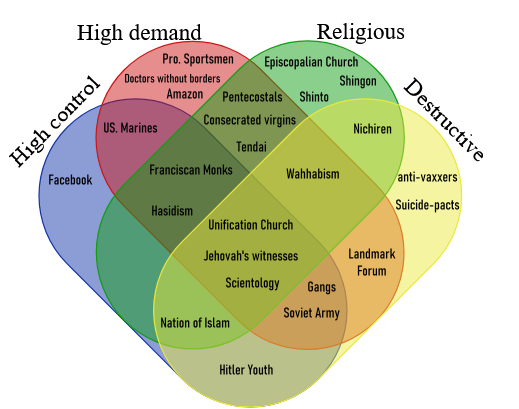 I think the categories themselves should be clear, with one possible exception (High control vs high demand). so this is how I use these 2 terms:
So to offer a contrast:
A) "Doctors without Borders" are a pure high demand group, because they require excessive investment of time and risk (and financial loss most of the time), but they don't have any extensive policing system.
B) Facebook is a pure high control group. They actively police their employees to weed out those that do not tow the company line. But they do not make unusual demands on their members otherwise.

So for me, a cult is a group that ticks all 4 factors as "yes". Scientology is a cult. The Soviet Army or the Bloods? Not really, though they have a lot of cult-like traits.