Evidence that Scientology is adopting an anti-vaxx strategy, and with political aspirations | The Underground Bunker

There’s a new group of Scientologists and their allies calling themselves the Conscience Coalition. It doesn’t have the official blessing of the church yet, but there’s no doubt they’re well connected with OSA, the Office of Special Affairs, which is responsible for all contact with the world outside Scientology. The stated goal of the new group is “To protect our fundamental right to freedom of conscience, which includes freedom of thought, belief and religion, is secured for every individual.”

With one notable exception the members are entirely Scientologists. Follow any of them on social media and you will find photos from the Freewinds, from Flag Land Base, from Delphian Academy, and from Scientology social reform front groups. The “Chief architect, strategist and lobbyist” of the group is Greg Mitchell, a registered lobbyist for Scientology who received half a million dollars from the church over the last five years. His wife Renee Bessone is listed as the founder and chair of the organization.

Evidence that Scientology is adopting an anti-vaxx strategy, and with political aspirations

Rod Keller has been reporting on a Scientologist-run political group, the “Conscience Coalition,” that has an anti-vaccination focus, particularly in a fight over legislation in California. The author of SB-276, the bill that was targeted, Sacramento State Senator Richard Pan, has put out a new letter about how he’s being attacked: “Scientologists are funding an out-of-state political operative to coordinate misinformation campaigns against me.” The Scientologists backed anti-vaccine Conscience Coalition has a Twitter account, @WeTheConscience, that is separate from than that of its Executive Director, Jonathan Lockwood: 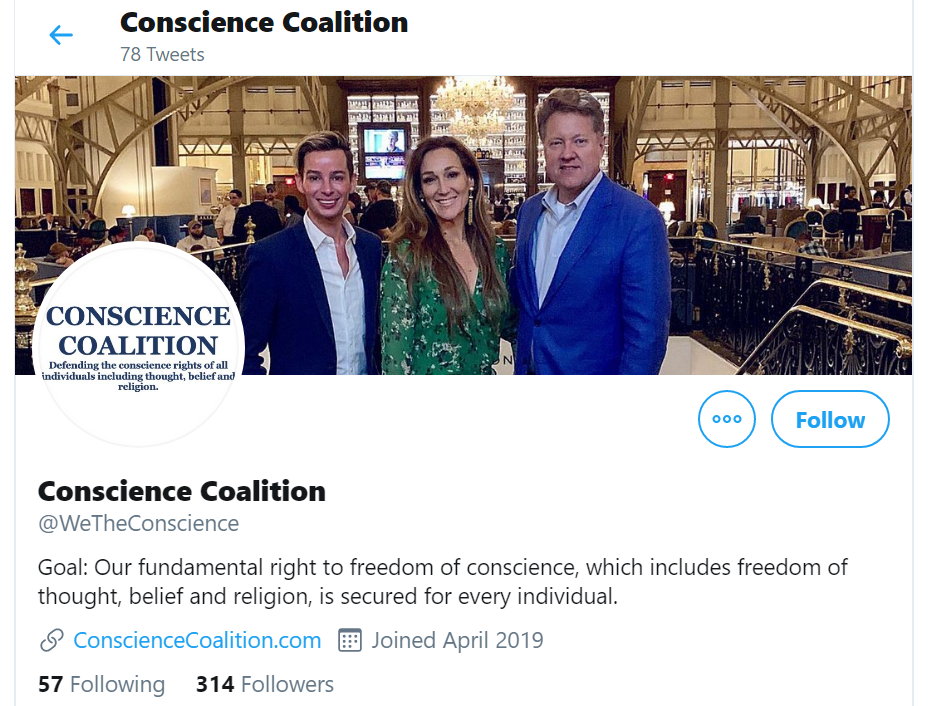 Seriously? WTF? Why? Because scientists have used the word "herd," and "We are NOT animals?" (BTW, it is for such pr concerns that the term "community immunity" is now often used instead of "herd immunity.") 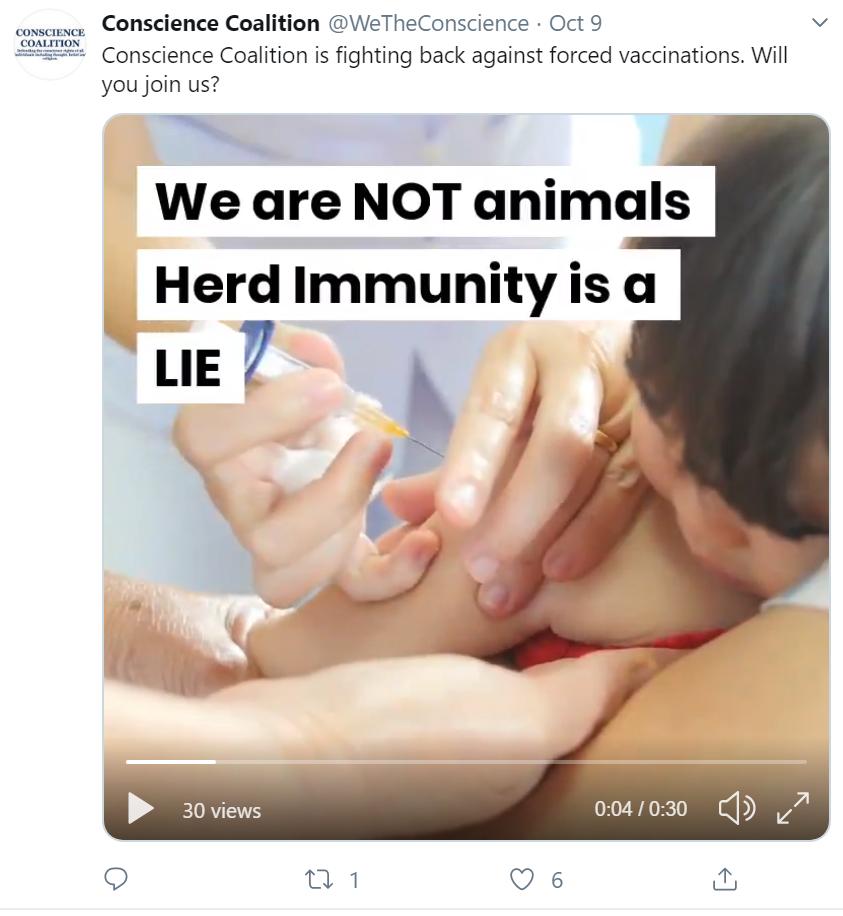 Rod Keller has a major story about the Conscience Coalition on Tony Ortega's website: 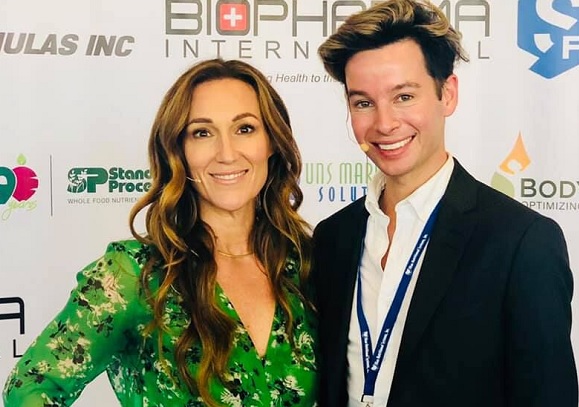 The Scientologist-led Conscience Coalition is continuing its anti-vaxx agenda despite losing the battle in California over SB 276, which made it more difficult for doctors to lie about their patients’ condition to get a medical exemption from required school vaccinations. Other bills are being introduced to increase vaccination rates including the Vaccinate All Children Act (H.R. 2527).

The anti-vaxxers are completely correct. Getting a smallpox inoculation CAN make you turn into a cow!
"Quid est veritas?" - Pontius Pilate

The “Conscience Coalition” is a deliberate misnomer.
The Unconscious Coalition is comprised of Scientology provocateurs and dopey safepointed Conservative/Libertarian types.

Another connection between the ant-vaccine Conscience Coalition and Scientology: Through Ulan Nutrional Systems, Inc. and Dr. Freddie Ulan. 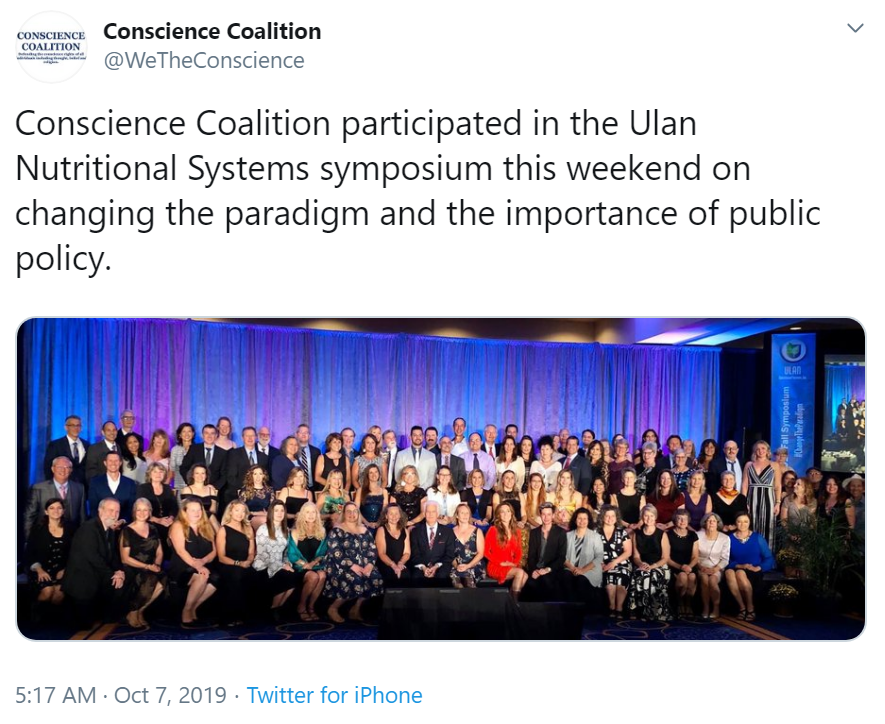 Ulan Nutrition Response Testing "is the culmination of decades of work by Freddie Ulan, DC, CNN."

Between them, Fred Ulan, Freddie Ulan, and Freddie & Dana Ulan have four pages of Scientology Service Completions which show that they are both Founding Patrons and Patrons of the Church of Scientology:

In addition, WWP has a screenshots of a 1989 Impact magazine interview with Freddie Ulan, then the Executive Director of CCHR Intentional: 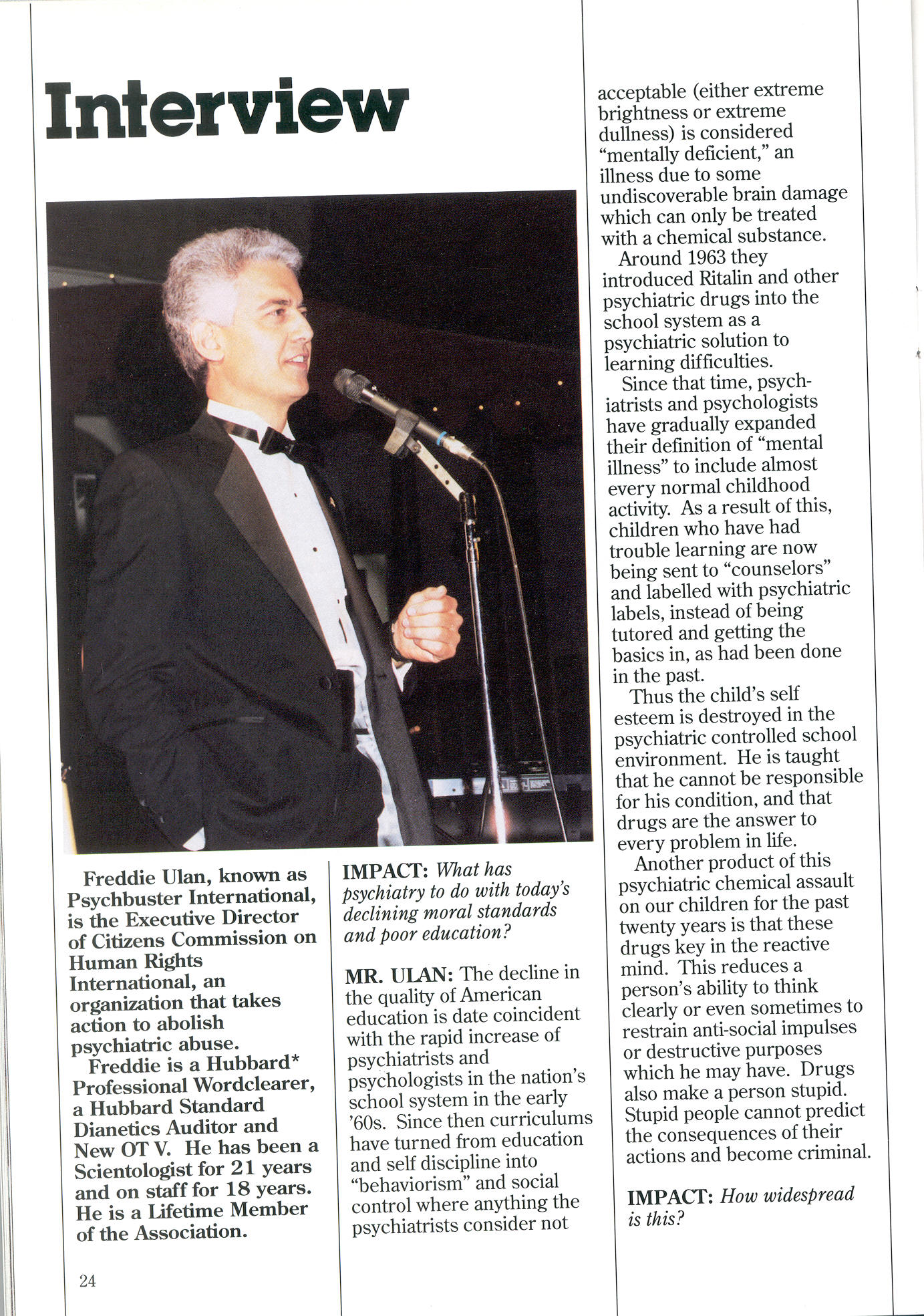 All of these individuals are Scientologists.

Anne Hof has two pages of Scientology Service Completions which reflect she is on the Honor Roll of the IAS:

Bill Johonnesson has a page of Scientology Service Completions:

Daniele Lattanzi has a page of Scientology Service Completions: 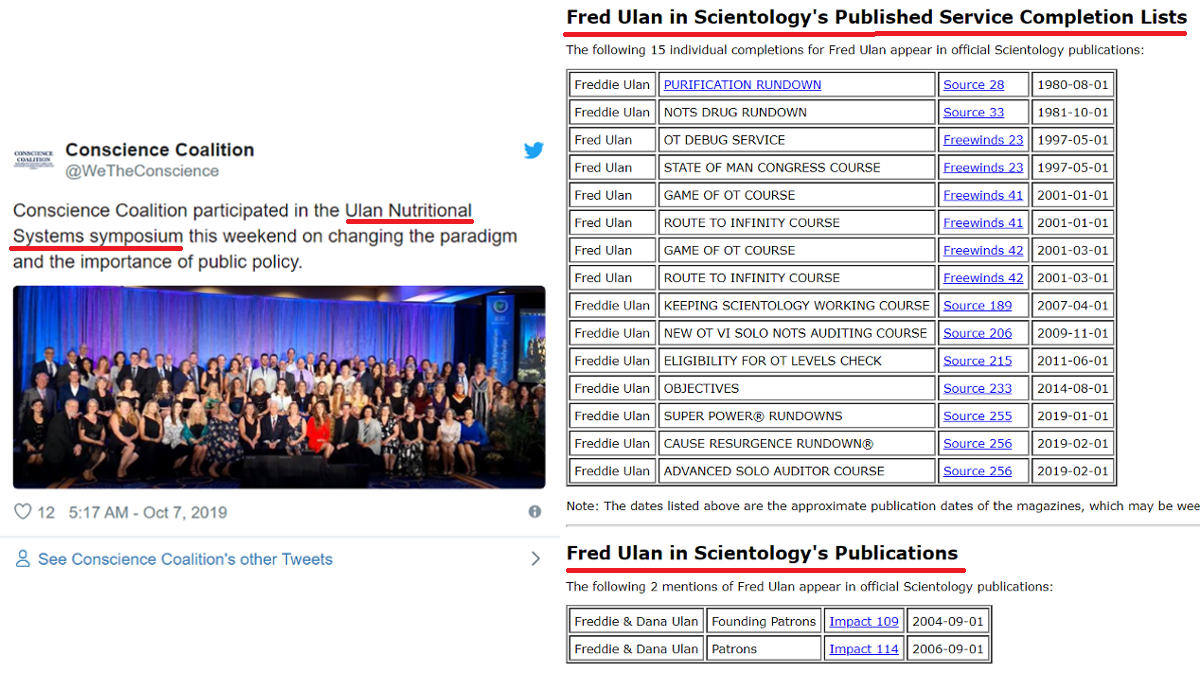 I wonder if the Church of Scientology will continue to support the Conscience Coalition and other anti-vaccine efforts given the following news. Doesn't it become bad PR at some point? Or does it continue to be a net positive for the COS given the pubic / demographic they are trying to reach? Perhaps the PR backlash will become sufficiently large when 50 children have died? 100? 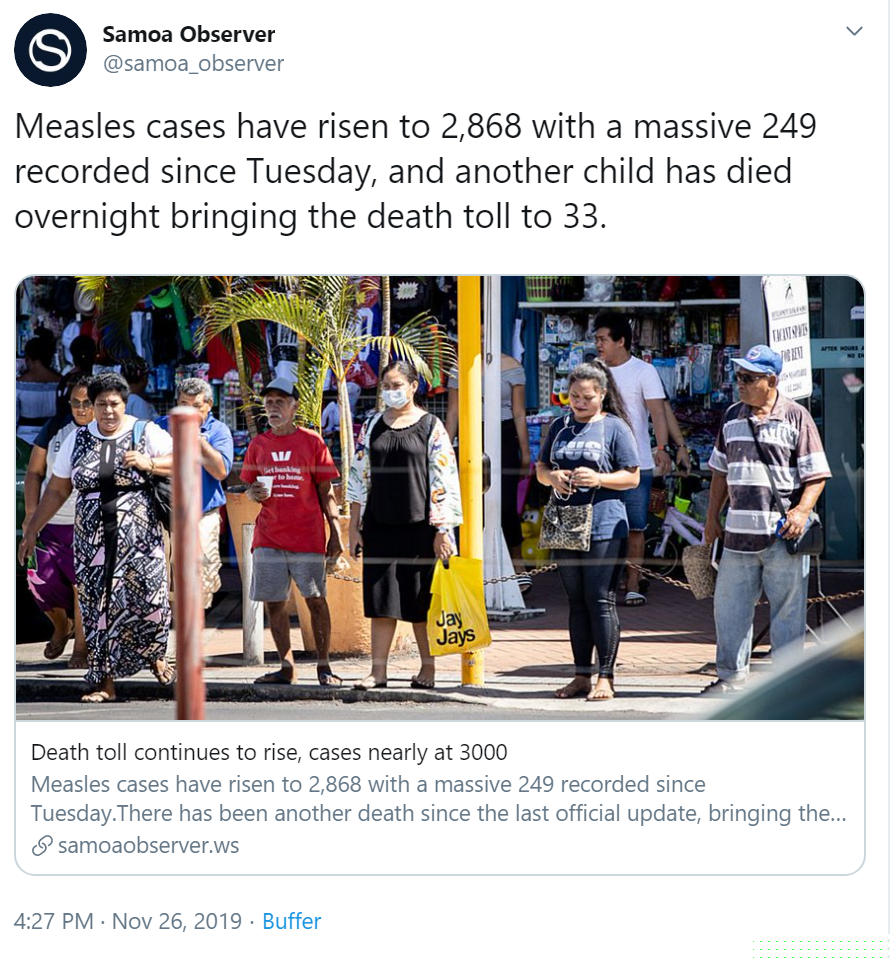 I wonder how the Scientologist led anti-vaccine Conscience Coalition will respond to this story? 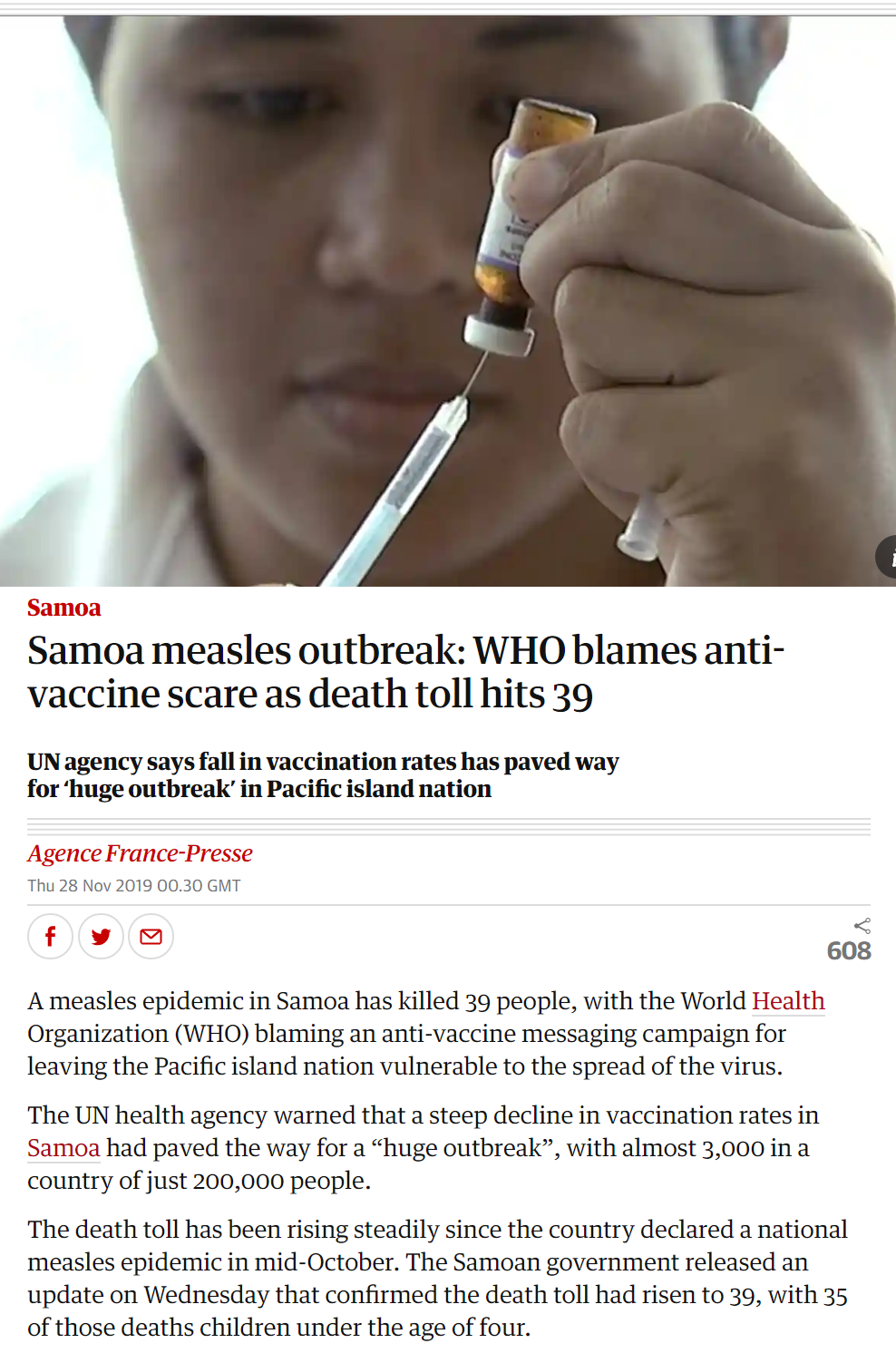 A measles epidemic in Samoa has killed 39 people, with the World Health Organization (WHO) blaming an anti-vaccine messaging campaign for leaving the Pacific island nation vulnerable to the spread of the virus.

The UN health agency warned that a steep decline in vaccination rates in Samoa had paved the way for a “huge outbreak”, with almost 3,000 in a country of just 200,000 people.

The death toll has been rising steadily since the country declared a national measles epidemic in mid-October. The Samoan government released an update on Wednesday that confirmed the death toll had risen to 39, with 35 of those deaths children under the age of four.

35 of the 39 reported Samoan Measles fatalities have involved children under the age of 4.
How horrible that the W.H.O. warning went ignored?

Several days ago, I wondered if 50 children in Samoa would have to die from measles before the Scientologist led anti-vaccine Conscience Coalition would respond. Sadly, we have now reached that point. 50 children dead from the measles. Measles. Total dead: 53.

50 children killed by measles in Samoa as outbreak worsens 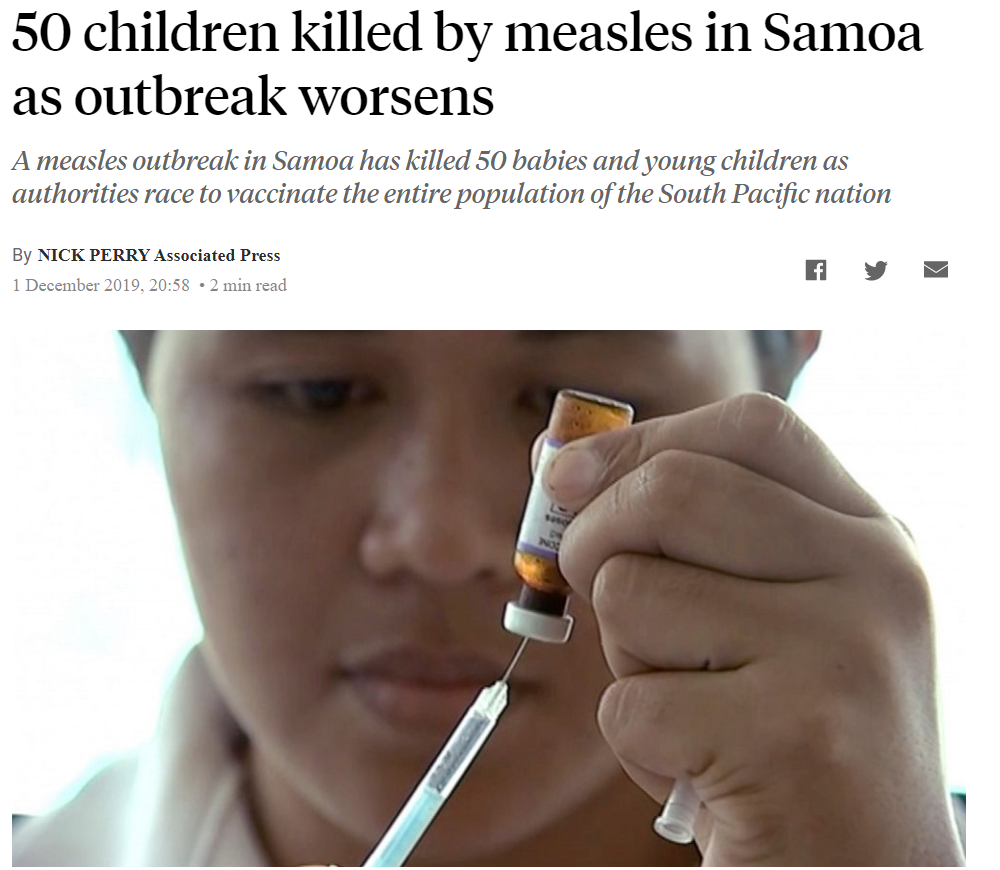 Latest table from the Government of Samoa.

stratty said:
The anti-vaxxers are completely correct. Getting a smallpox inoculation CAN make you turn into a cow!
Click to expand...

On a more serious note, I believe that smallpox is pretty much eradicated now and (I think) the vaccine is no longer required or used.

Smallpox samples stocks are still in existence I believe in biological warfare research labs. As to current news about that, I would not know.

Onto the measles epidemic over our way....

My niece's young son in Auckland was too young to be vaccinated normally and was given the vaccine at 6 months of age, since the current measles outbreak seems to have originated from there and ended up in Samoa with tragic results.

Her son took a reaction to the vaccine, but was fine after a few days. His mother thinks she has done the right thing and would do it again. Believes it to be better than the measles. Her story was all over the TV news there with the usual plethora of supporters and anti vaxxer dupes.

Perhaps the Scientologist led anti-vaccine Conscience Coalition would like to respond to this? 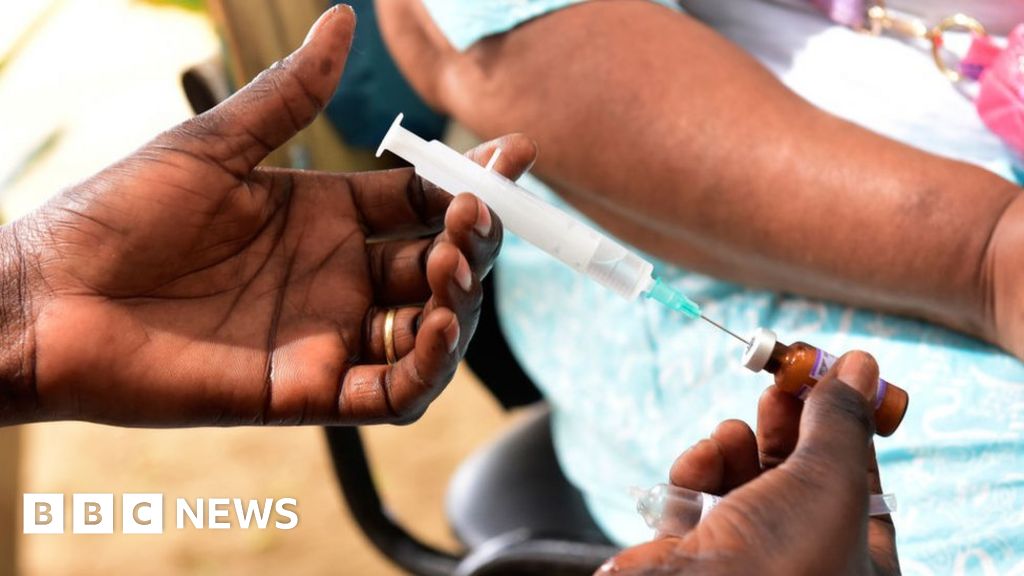 Almost 250,000 people in the Democratic Republic of Congo are thought to have been infected in 2019.
www.bbc.com

Four million children have been vaccinated, but experts warn that this amounts to less than half of the total in the country - and not enough vaccines are available.

The majority of those infected with measles in the country are infants. 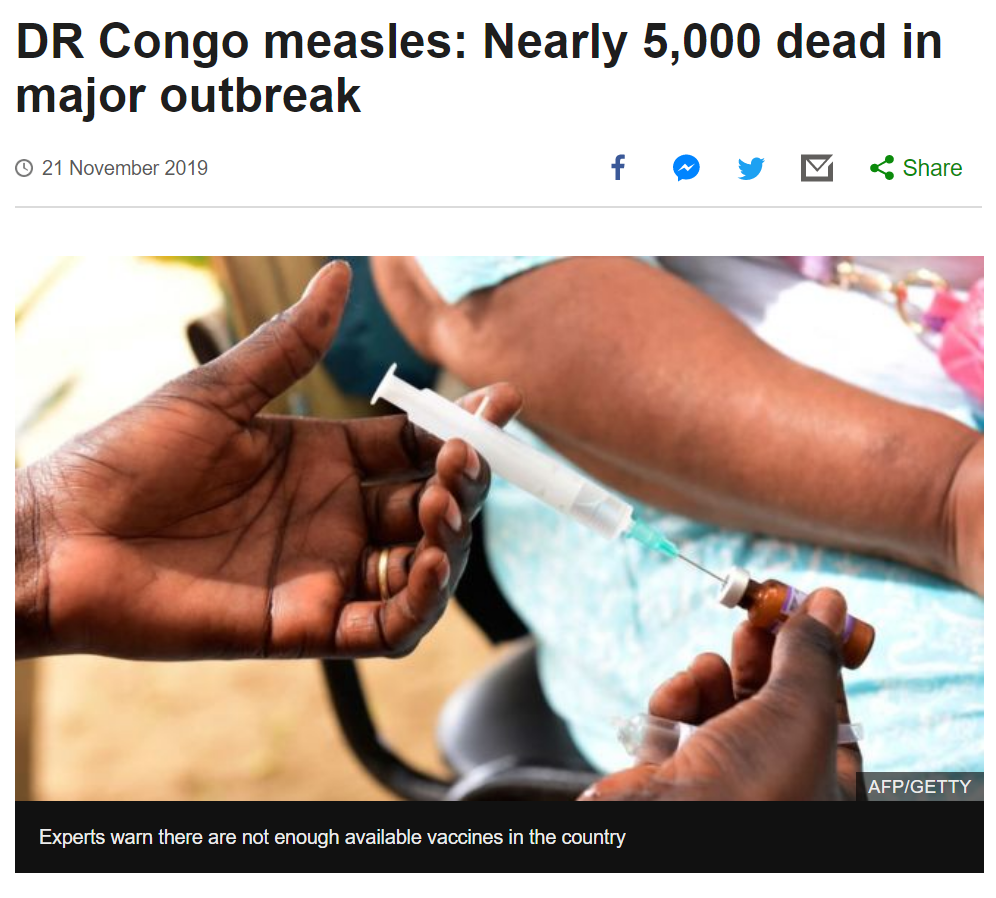 When I was at junior school there were always one or two kids kept at home because they had measles or mumps or something. I don't recall it being thought of as a terrible disease that could easily prove fatal, although of course I could be wrong. Personally I managed to avoid catching either of those although I did get chicken pox, which was another very common schoolchild affliction back in the day.
Last edited: Dec 3, 2019
"Quid est veritas?" - Pontius Pilate

stratty said:
When I was at school there were always one or two kids kept at home because they had measles or mumps or something. I don't recall it being thought of as a terrible disease that could easily prove fatal, although of course I could be wrong. Personally I managed to avoid catching either of those although I did get chicken pox, which was another very common schoolchild affliction back in the day.
Click to expand...

This is the 12/2/19 chart from the Government of Samoa. I think one of the key factors regarding the number of deaths is the age of the victims.

For the Scientologist-let anti-vaccine Conscience Coalition should it care to respond, the 12/4/19 update from the Government of Samoa about the measles epidemic.

"Latest update: 4,217 measles cases have been reported since the outbreak with 165 recorded in the last 24 hours. To date, 62 measles related deaths have been recorded." 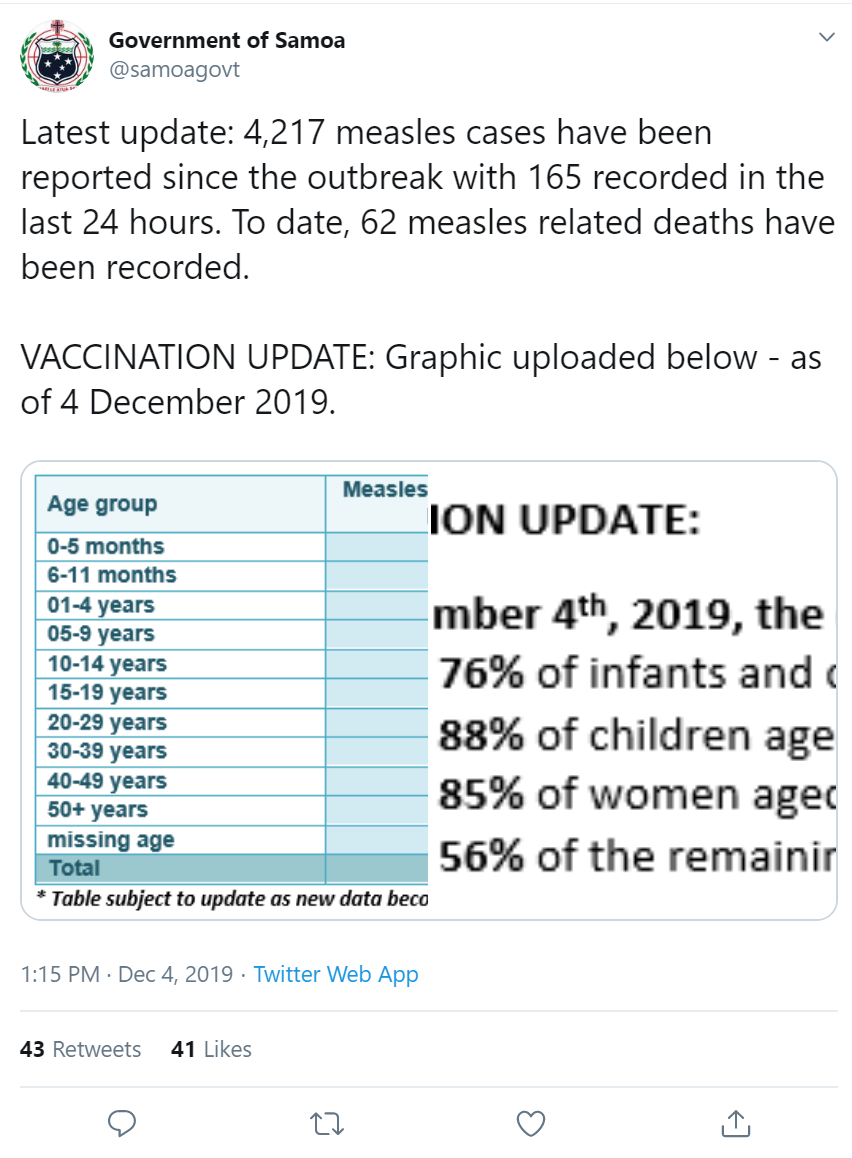 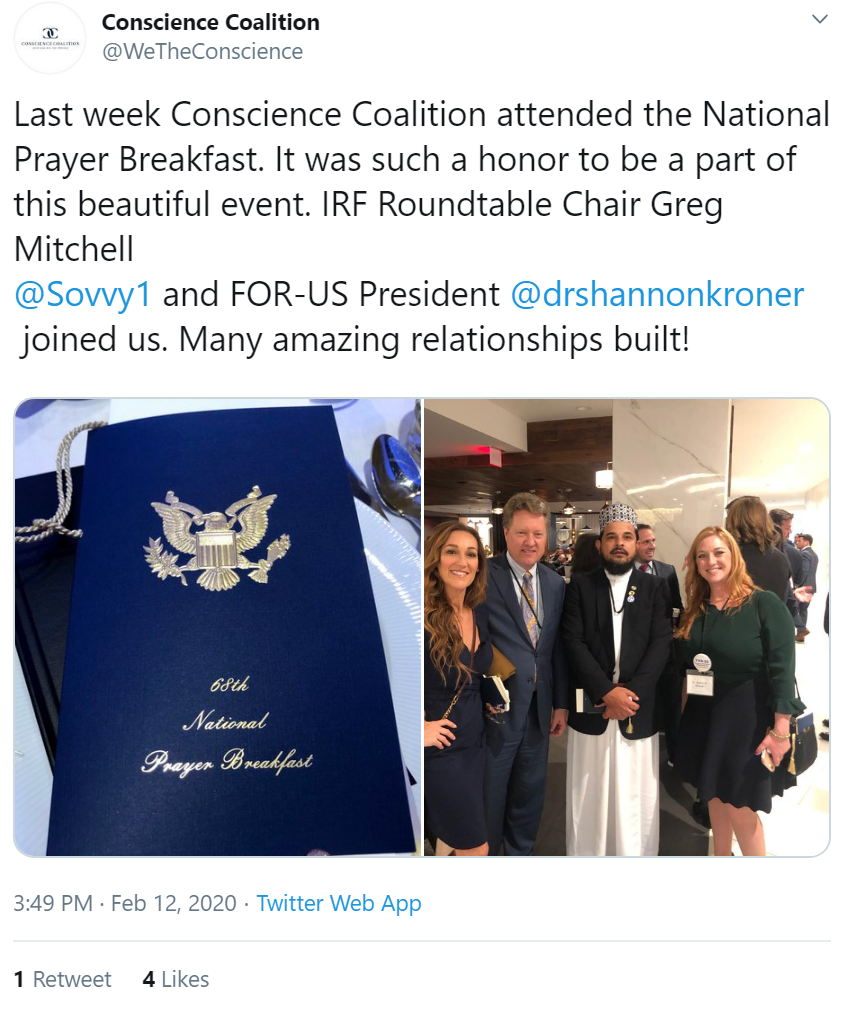 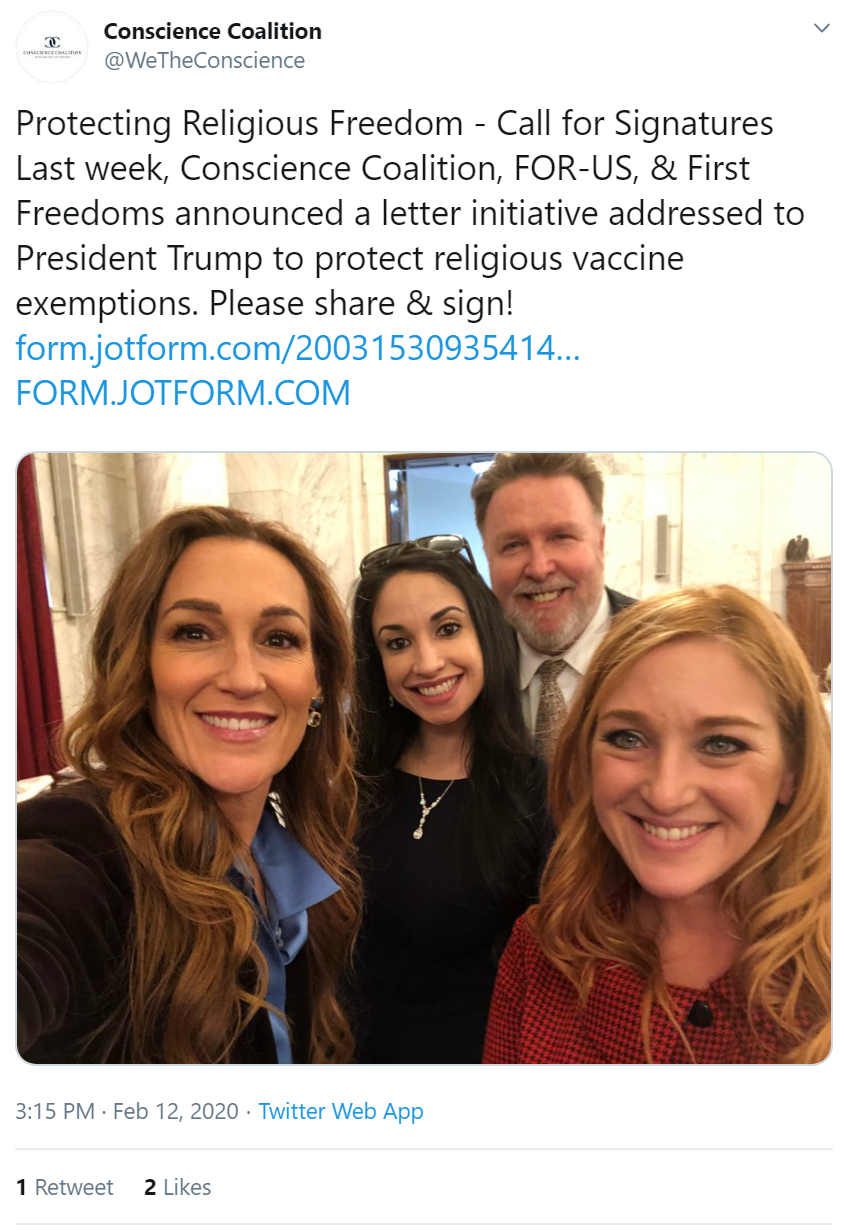