Scientology is a business

Scientology is a business and a system of psychology that operates on the Destructive Cult model. In places, and at times, where it's expedient, it masquerades as a religion.

Where it is not expedient, it does not adopt a religious patina.

There are also churches that are not cults.

Ironically, people - such as atheists and materialists - who generally don't like religion, tend to have a blind spot with regard to Scientology's "religion angle" - as its founder called it. They usually don't like Scientology and think they're insulting it by calling it a "religion." If they care about the people - and especially the children - harmed by Scientology, they'll seek to clarify their thinking on the topic.


There are many variations, shades, and nuances.

In the New Age movement of the 1960s, there was, commonly, spirituality without religion. Religion was rejected, and spirituality was sometimes also rejected and replaced with a study of consciousness.

Rosicrucianism is not a religion. The Monroe Institute, known for its study of Out Of Body Experience, is not a religion. Therapists who do past life regression are not religious. The British Association of Spiritualists, the British Society for Psychical Research, and the American Society for Psychical Research, are not religious. Even Aleister Crowley's Thelema did not attempt to pose as a religion, with Crowley warning that, to do so, "would create a rather stupid kind of mischief."

In recent times, some persons and groups, seeing Scientology cynically using a religious cloak and getting away with it, have sought to do the same. Yet, it is just as much a devious "angle" for them as it was for the scheming L. Ron Hubbard in December 1953. 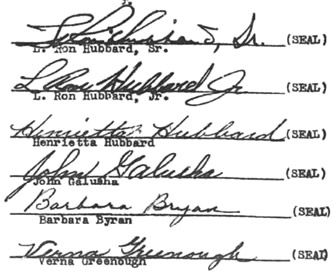 (As an aside, it's interesting that three of the signatures, on the incorporation document, are L. Ron Hubbard Jr., Henrietta Hubbard, and Barbara Bryan, who were also witnesses to the creation of Hubbard Sr.'s fraudulent "Russian" Manual, with the latter two having transcribed it from Hubbard Sr.'s tape recorded dictation. )

After the activation of the "religion angle," Hubbard's editor (and self described "fan"), John Sanborn, created an outline that Hubbard would use in his presentation during the 1954 lectures in Phoenix, Arizona, which would seek to connect Scientology to Buddhism. As with the vanity lists of great thinkers in the opening pages of the books, Science of Survival and Scientology 8-8008, it would seek to give Hubbard, and Scientology, respectability and gravitas.

Buddhism was not a religion, nor Taoism. They were Wisdom Schools. Only when they became degraded did they adopt propitiation to spirits - which the common people at the time could understand.

There are all sorts of circumstances and twists - the ancient Chinese Book of Changes (also known as the I Ching) is a mathematically based philosophical system, that has survived for thousands of years, not because it is a beautiful source of wisdom, but because it is used as a fortune telling device.

Similarly, the less exact philosophical system of the Tarot survives as a card game.

It's good to notice detail and nuance.

Three years later he released another album titled
No Guru, No Method, No Teacher.
​
Mirror of The Scientological Onion
And the ESMB Web Site, plus
the Original ESMB Message Board

Judge Waldrip listened to arguments on both sides week after week and month after month.
This was a judgement he made.

Dib Waldrip is currently Judge of the 433rd District Court in Comal County. Approximately half the case in this court are criminal; the area of law critical to keeping us all safe and which has the most impact on the defendant who has liberty and/or life at stake.