For more information, please see the following thread on the original ESMB:

Mark Bunker reports he has filed the paperwork to run for Clearwater City Council. 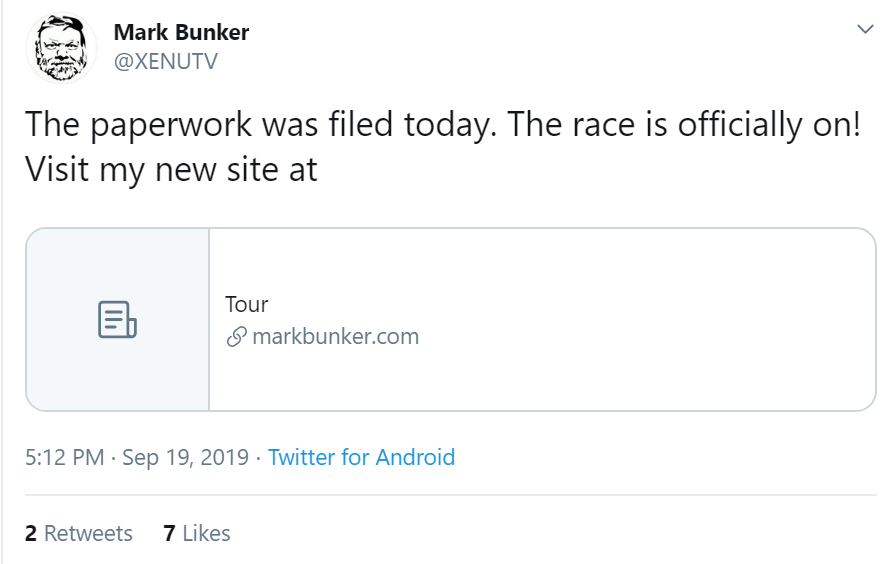 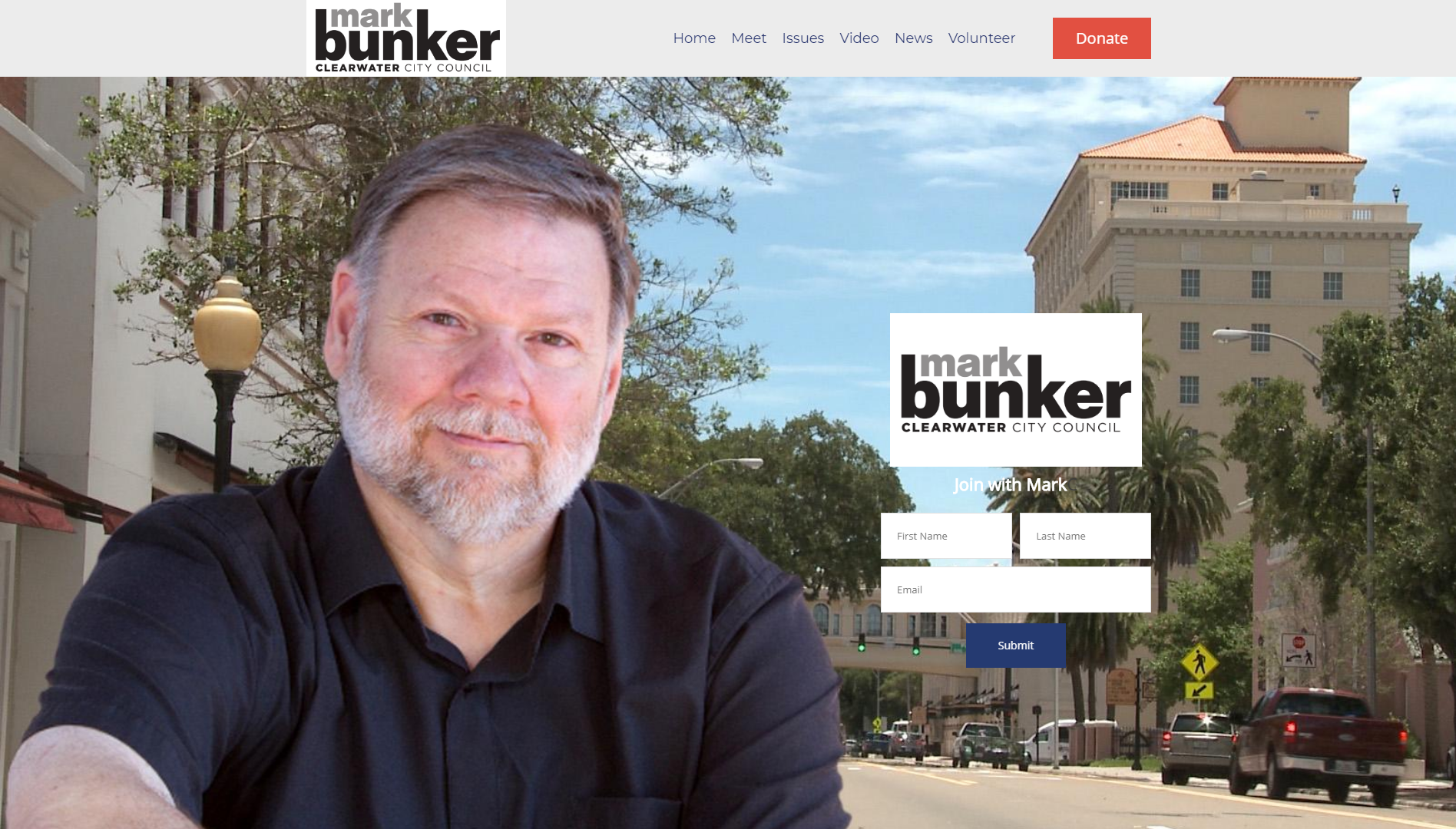 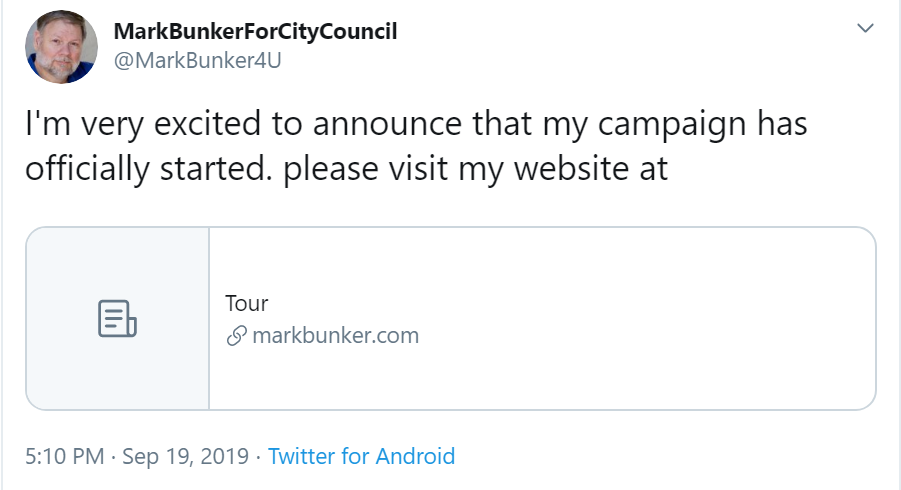 Scientology is following the mandates of L. Ron Hubbard. His policy for scientology states clearly:

“Bring the government and hostile philosophies or societies into a state of complete compliance with the goals of scientology.”

This IS what they are working on. This is the word of God as far as scientologists are concerned.

While the City Council does not have enormous power, they do have some say in the activities of Clearwater. And they are elected by ALL the voters in the city, not a stacked deck of landowners in the downtown area.

Those unfamiliar with scientology policies often fall prey to their tactics. They become unwitting pawns in the games that scientology plays to influence their environment and gain “PR Area Control” and “Safe Points” as dictated by the writings of Hubbard.

This is why Mark Bunker is so important as a voice on the Clearwater City Council. He knows the game. He is aware of how they go about creating influence. And most of all, he understands that the ONLY thing scientology and scientologists are interested in is what is good for scientology.

"...derail the offered game with a feint [make a false show, pretend] or attack upon the most vulnerable point... if attacked [almost anything can be considered an 'attack'] by anyone or anything or any organization always find of manufacture enough threat against them to get them to sue for peace... The goal of the Department [now called OSA] is to bring the government and hostile philosophies or societies into a state of complete compliance... This is done by high level ability to control ['ARC', PR, etc.] and in its absence by low level ability to overwhelm. Introvert such agencies. Control such agencies..."

As Scientology Inc. attempts to gradually assert its control over Clearwater, watch as those seeking elected office, more and more, say things like, "I'm a Christian."

This would be a "feint," as described in the above quote.

__________________
​
A short time ago, Mark Bunker spoke before the Clearwater Downtown Development Board, which prompted a bizarre reaction from Board member, and OT 8, Ray Cassano.


The "Most Scientologists are Christians" thread.

​
Last edited: Oct 2, 2019
Mirror of The Scientological Onion
And the ESMB Web Site, plus
the Original ESMB Message Board

Aaron Smith Levin reports that Mark Bunker has officially qualified to be on the ballot for Clearwater City Council - Seat 2. 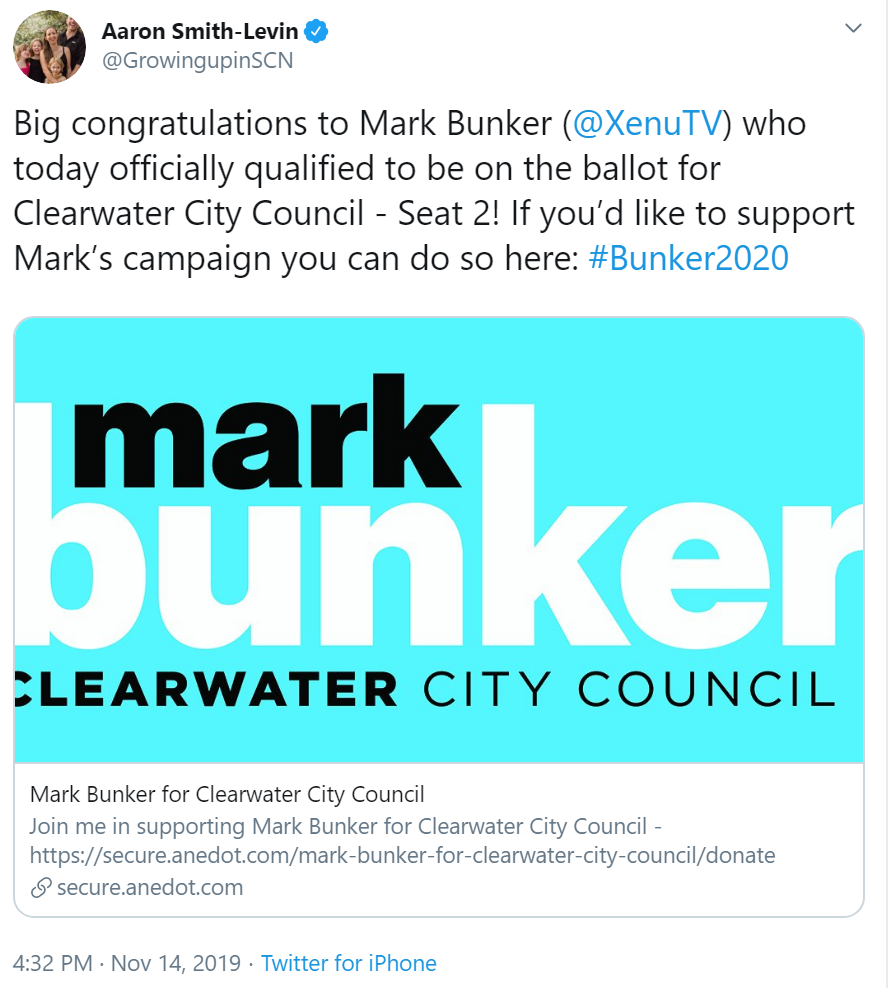 Tony Ortega posted about Mark Bunker having enough signatures to become an official candidate for Clearwater’s March 17 city council election. It is the second item today, 11/15.19. Mark Bunker's statement is below. This is such an exciting journey. Every door I knock on, I get a really enthusiastic reaction when I explain I’ll be taking on Scientology. It is such a big issue in Clearwater and the people here are tired of politicians who are too afraid to even mention the word. They also have stories to tell. One woman saw a Sea Org gal run from the Fort Harrison only to be chased by a security guard and dragged into a van while she was screaming. Another man has a neighbor who is a FED EX driver and explained that the driver came back to his truck after a delivery downtown only to find a Sea Org gal hiding in the back of his truck. She begged him to help her get away but he freaked out and kicked her out of the truck. You shouldn’t have to escape from any organization let alone a church.

I truly believe we can win this race. We just need to get the word out. We’ll have a chance to increase turnout at the polls if we work hard enough. Typically, only about 2,400 people vote in the down ballot races for Mayor and City Council here in Clearwater. Most people don’t follow the local races at all but this election can change that. This issue can galvanize the electorate.

Today, I had lunch with Pastor Willy Rice from Calvary Baptist Church. We ate at a popular spot called Rumba. When I sat down, a waiter (not working our section) came up to me and said, “Excuse me. Has anyone ever told you you look like Mark Bunker?” I replied, “No, but it makes sense because I am Mark Bunker.” He told me how much he loved my videos and it was very flattering, but when I mentioned I was running for city council he wasn’t even aware of that. He said he will definitely be voting for me and would spread the word. So here’s a guy on my side who wasn’t yet aware that I am in the race. The next few months will change that. I’ll be talking to as many voters in person as humanly possible and start to make more use of video to target messages to the city.

I am incredibly fortunate to have a great group of volunteers behind me as well. They were an enormous help gathering signatures to get me on the ballot and will be working hard to spread the word and get people to the polls on March 17. They started referring to themselves as the Bunker Brigade. The first time a group of us met in person to gather signatures at a Calvary High football game, I found myself deeply touched that these people believed in me and wanted to make sure that I was elected. I don’t want to let them or the city down so I will do everything I can to win.

If you’d like to help, please click on this link to donate to the campaign. The money raised will be used for marketing materials like mailers, lawn signs, radio and TV ads and if we can raise enough there is someone who is interested in being a campaign manager for us which would be an enormous help in organizing our efforts. T-shirts, bumper stickers and other merch is also on the way. Help us Reclaim Clearwater!