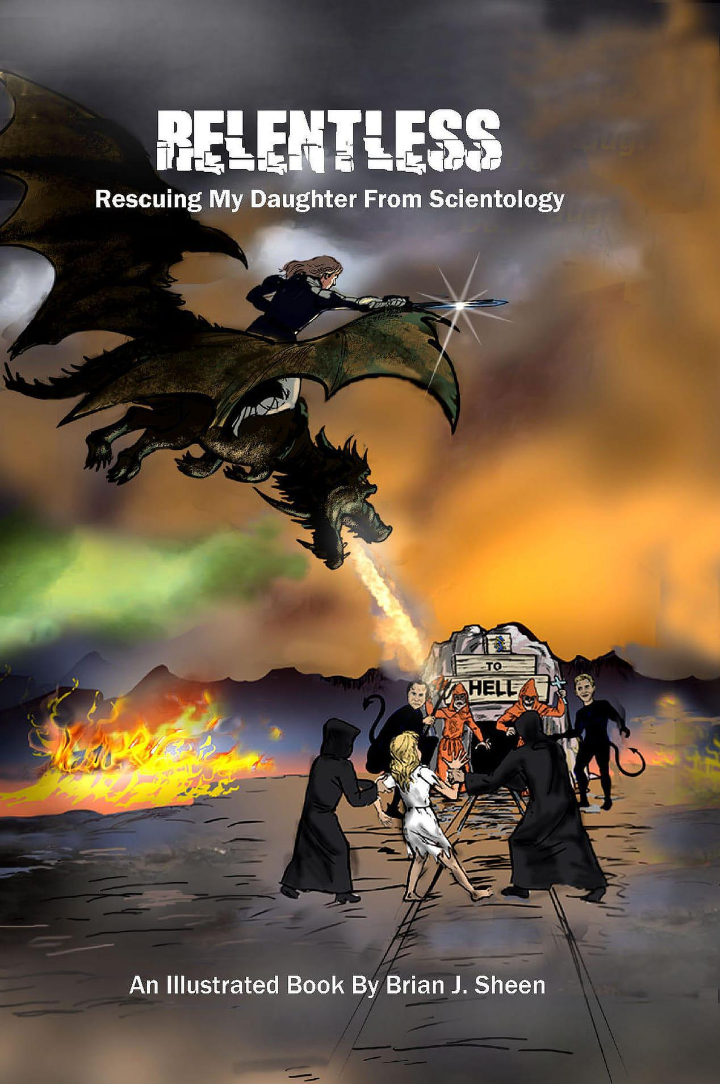 Learn why leading authorities on Scientology and religion call this book, "Powerful. Righteous. He will never be silenced and will ultimately prevail." "Great. Gripping. Devastating." "The text and illustrations make for great reading”.

"Triggered by Scientology’s cruel disconnect policy the reader will journey with the author as he doggedly pursued every opportunity to heal his family tragedy. ”.

"The illustrations give an added dimension as you learn all about the so called "prison of belief" and the vengeance and retaliation that is the trademark of Scientology. Highly recommended to all."

Relentless, acts as a warning to any existing or prospective new Scientologist, to recognize the trap of how Scientology imprisons you in their demented beliefs and how Hubbard’s processes create severe mental dysfunction and dangerous disassociated states. Readers will feel the emotional impact through the gripping illustrations that share my devastating journey, whose daughter is being held emotional hostage by the Church of Scientology and have prevented me from meeting his three-year-old grandchild, who is being subject, unwillingly, to their coercive doctrine.

I share my relentless struggle to have both local, state, and national government agencies fulfill their responsibility to protect his family from the state and federal constitutional violations of laws and decency from an organization who was already found guilty of infiltrating over 100 government agencies, to prevent them from fulfilling their functions to provide security and justice for its citizens. This includes Scientology's current attempt to blame the multiple rape victims of celebrity Scientologist Danny Masterson to instead, accuse his victims, not him, of committing a crime, by their reporting of their rapes to the police!

Understand why, celebrity Scientologists like Tom Cruise, John Travolta, Elisabeth Moss and Greta Van Susteren are pressured into supporting Scientology’s unethical acts, and luring new followers into the Church. while each must live with an ongoing threat from Scientology, similar to their vicious attacks on Leah Remini.

Discover how the Church of Scientology hypnotizes their members and uses mind control, while it attacking anyone who questions it, especially family or friends, demanding their members disconnect from anyone those who dares to question their alien invasion and enslavement doctrine in the hope to achieve fabricated superhuman abilities.

A fight against Scientology ‘disconnection’ now a remarkable illustrated book

This was a riveting read even though I knew some of the story.
Lots of twists and turns.
The images give a whole dimension to the text. Loved it.

The book "Relentless: Rescuing My Daughter from Scientology" by Brian Sheen has been released as an Audible audio book:

The audio book is free with an Audible membership trial, or $13.08.


"“This was quite a challenge as I had to capture the messages of the illustrations and convert them to text to provide the same impact,” he tells us. “This was a fantastic process as while doing this I realized by true fear for my daughter and grandson was the complete de-humanization process that occurs the moment you sign up for a course and are then turned into a ‘stat’.”"