In memory of Jack Parsons 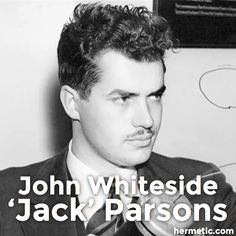 Parsons, also known as Belarion Anti-Christ, had many late night conversions with Hubbard.

To what extent did Hubbard draw form Parsons' scientific mind in the creation of such things as The Factors, Scientology's many scales, the Axioms, and much more?

We will probably never know, but during a conversation with Hubbard's daughter Alexis, I was told, by Alexis, that Parsons, after Sara's divorce from Hubbard, wrote to Sara, and may have visited Hubbard one last time, before blowing up himself in an explosion in 1952 .

If only Jack Parsons had lived. He could have told us much.
Last edited: Mar 6, 2021
Mirror of The Scientological Onion
And the ESMB Web Site, plus
the Original ESMB Message Board

I always thought of Jack Parsons as Hubbard's 2nd dupe. The first being Polly.

It's more complicated and nuanced than that, don't you think? Parson's was a brilliant self-taught rocket engineer and chemist, and co-founder of Caltech.

Polly was a farm girl who worked in a shoe store. How was she duped more than anyone else is duped? Have you seen her letter to Sara from 1951?
Mirror of The Scientological Onion
And the ESMB Web Site, plus
the Original ESMB Message Board

I actually see it the other way around.

Jack recruited Hubbard into his cult when Hubbard was at a particularly low point in his life. He got him in with some of the promises we all find familiar: magical superpowers, adventure and a cheap room to rent.
I do not know what exactly made Ronnie decide to quit (maybe he was tired of lighting candles and singing incantations when Jack was busy having ritual sex with all the pretty women?), but once he made the decision, there was no turning back.

Also, I have to give it to Ron - running away with the Guru's main squeeze and his money is one heck of a way to quit a cult. Let's agree to allow Hubbard to claim a win when he deserves it for once But the affirmations are to me an obvious product of a very dazed and confused ex-cultie. Thelema really messed up Ron's head and I do not think he ever completely got over it, especially the magical thinking part.

You are correct in your appreciation. I think that If the cult persuade you in any form to take your own life; it is because that cult is darkness from beginning to end, we have to quit from anything is darkness.
Frank Suarez take his own life last week, he shows a big smile with a deep sorrow and depression in his eyes at the same time... so It say more than his words when he talked about happy life and success.
The real wealth come with joy and not with sorrow.